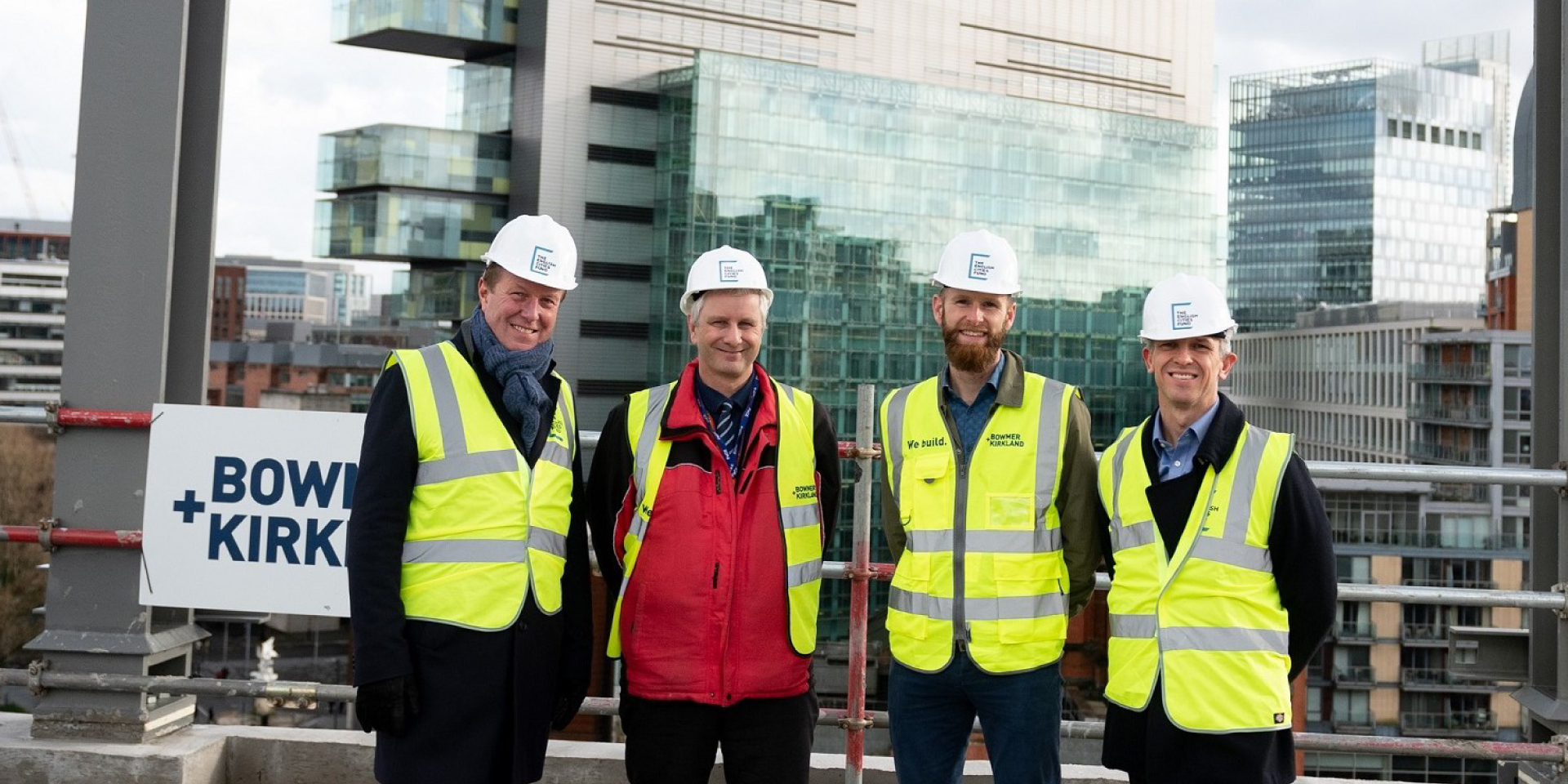 As the architecturally iconic Three New Bailey tops out, HM Revenue and Customs (HMRC) and The English Cities Fund took the opportunity to come together to celebrate the milestone with a tour of the building, which will become HMRC’s new Greater Manchester base.

With its striking red brick weave façade hitting the changing Salford skyline, the construction of Three New Bailey is firmly on track and now that construction has reached its highest point, the team at HMRC was invited to get a closer look at their future home.

It was announced back in 2018 that HMRC had selected New Bailey for its new regional centre, due to its innovative repurposing of the area and agreed to pre-let the entire 157,000 sq ft seven storey building on a 25-year lease.

The move to New Bailey will allow HMRC to adopt a more agile working environment for its 2,400 civil servants who will be based at the scheme. The topping out event gave some of the regional team the opportunity to go inside the development for the first time and experience the views across Manchester and Salford from the roof top.

Phil Mayall, regional director at The English Cities Fund, said: “We welcomed HMRC to New Bailey last year as we broke ground on their new home, and it’s fantastic to invite them back again now to show how far the development has progressed in such a short space of time. Now that the main structure is complete and the distinctive weave façade is taking shape, you can really see the building coming together. It serves as a bold statement of the innovative and distinctive design, and high-quality offering that we strive for in all of our projects.

“New Bailey is now completely unrecognisable to what it was when it was just a surface car park. Now with high-profile occupiers such as HMRC choosing the scheme as its new home, bringing its team to the city is what it was all about. The topping out of Three New Bailey is an important step in the build programme and we look forward to seeing the building, as well as the wider development, continue to thrive and be a catalyst for both further investment and regeneration in the area.”

HMRC is transforming its estate to create a tax authority fit for the future. The Manchester Regional Centre is one of 13 regional centre developments located across the UK, which aims to bring its staff together into modern and flexible working environments.

HMRC is leading phase one of the Government Hubs Programme – the Government Property Agency’s strategy to transform the Government Estate. It aims to drive efficiencies for the taxpayer, boost the UK economy by freeing up much needed land and property, and provide a modern working environment for civil servants.

Colin Casse, director of estates transformation, HMRC, said: “This marks a significant milestone for our Manchester Regional Centre and HMRC’s transformation into a modern, digitally advanced organisation. Once completed, Three New Bailey will be a great place to work, providing a contemporary, collaborative and flexible workspace for our people. We also look forward to working closely with colleagues from other government departments who will be joining us in the new building.”

Salford City Mayor Paul Dennett said: “It is fantastic that the HMRC are able to tour their new building in a brand-new business district in Salford. The growth in the area is incredible, creating jobs, investment and opportunities that local people can benefit from. We now look forward to the building officially opening and welcoming all the HMRC staff into their new home in Salford.”

New Bailey is being delivered by The English Cities Fund, a joint venture between Muse Developments, Legal & General and Homes England, in partnership with Salford City Council. The joint venture partnership is currently delivering some of the most complex and most successful urban regeneration projects across the UK. Following its expansion in 2018, it continues to take on large, complex sites, to create inspiring new places.

JLL and Cushman and Wakefield are joint agents on the New Bailey scheme.